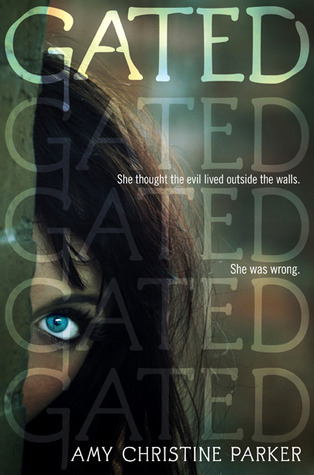 Synopsis: When Lyla was 7 years old, she and her sister Karen were playing outside and Lyla went inside to tell her mother that Karen wasn’t playing fair. When she came back only Karen’s bright red shoes remained. A few weeks later airplanes crashed into the World Trade Center on 9/11 and the police stopped looking. With no extended family or close friends for comfort, Lyla’s family fell into despair, but then came Pioneer with his visions of the Brethren and the end of the world. He told them that they were among the Chosen and meant to be saved. With Pioneer the world seems bright again and things are finally looking up.The whole family packs their bags and moves to Mandrodage Meadows to prepare for the end.

Now 17, Lyla believes that life in the community is perfect. Pioneer makes everything run smoothly and he is always right. With the end of the world only 3 months away, Lyla can’t afford to allow her faith in Pioneer and the Brethren to falter now, but that was before she met the mysterious outsider who made her question everything.

Review: I have a confession to make: I’ve never read a physiological thriller before, or a book about doomsday cults but as soon as I saw the signed copies on display at my local bookstore I knew I had to have one. I kept seeing this book everywhere, but was hesitant to read it because I thought it was just another dystopian. I could not have been more wrong.

In fact, this book seems almost like a slap in the face to all the YA apocalyptic books out there. I say this because in typical young adult literature the people predicting the end of the world would be the ones with the right idea, but in this book they have the the wrong one. It might even be for the best to come into this book unsure of what to expect, because most of the details I could share are spoilers.

It had a slow beginning, but as the book progresses the pacing and action picks up. Despite this, at no point did I feel that the book was boring and I was hooked from the beginning to the end (but especially at the end). Perhaps my biggest complaint is not with the book itself, but that I made the mistake of reading this book on my first day of school. How could I possibly focus on my classes while I was reading such an awesome book?

The romance was a little rushed and there was a love triangle present, but with the way that Lyla’s isolated cult lived I don’t feel that a slowly developed relationship would have been possible. Romance was also complicated by the presence of “Intendeds” which were basically whoever Pioneer (the cult leader) had arranged for for the teenagers in his cult to be married to.

As the story progresses our protagonist, Lyla, begins to question certain aspects of cult life including whether or not the end of the world is in fact drawing near and chalange Pioneer himself. I found this gradual shift  in her character to be realistic as ideals that someone has held for their whole life don’t change overnight. It should be noted, however, that not much time was spent developing the personalities of side characters so a few of the characters felt a little flat.

As this was a standalone, the ending wrapped just about everything up rather nicely, but there were enough story elements left unexplained that I feel like there is room for a sequel (i.e. What was in Pioneer’s room?). All in all, I enjoyed Ms. Parker’s debut novel and will keep an eye out for her future writing.

“None of this will ever make sense. I thought we came here to escape all the ugliness out there, but we can’t, can we? It’s here too. We pretend like it’s all okay–this place, our routines– but it’s built on lies.”

“It comes down to whether or not you’re ready to die today. I’m not. If the world ends, we can’t fight it, but we can fight one man. We can choose to live this day and every day after it that we have left.”

“The weird thing is that it still could. I mean, it won’t, of course, but on any given day anything’s possible. It’s what makes being here–on this planet–scary. We can’t predict what will happen. We can’t control any of it. Good things. Horrible things. We can only deal with it as it comes.”

“If a sky this dark can still be peppered with so much light, maybe this world can be too.”

Rating/Recommendations: This is a great gateway book for those who have not read books about doomsday cults before. However, I have a feeling that it was on the less intense side of the sub-genre so I’m not sure what people who already enjoy this variety of books will think. On the other hand, I also recommend that readers searching for a happy book look elsewhere because this is one of those books that makes readers consider the shadier side of human nature. I give Gated a 4/5 rating for being a unique edition to the Young Adult genre but with some minor issues with pacing, a rushed romance, and side characters that could have used some depth.