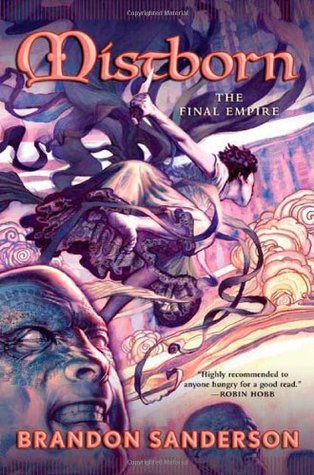 Synopsis: In the Final Empire ash rains from the sky, and strange mists rule the night. All is it has been for the last thousand years of the Lord Ruler’s reign. Many have tried and failed to overthrow his oppressive regime in which the majority of the population are kept as slaves. Most think hope was lost long ago, but Keliser thinks hope remains.

Keliser is legendary as the only slave to escape the Pits of Hathsin alive. After a two year leave Keliser returns to the capital where he was a once leader in the criminal underground gathering together the most skilled criminals in the empire’s capital telling them he’s planning the biggest heist since the Final Empire began: to assassinate the immortal Lord Ruler.

Joining the criminal crew is Vin, a teenage girl who has just made a shocking discovery. Vin learned she is no ordinary street urchin of the slave class, but a Mistborn. Mistborn are the most powerful type of Allomancers, individuals who gain extraordinary abilities through metals. Vin must learn Allomancy and involve herself in noble politics. Together Vin, Keliser, and the others might just be able to accomplish the impossible and free their people from slavery.

Review: I’ve read Brandon Sanderson books before and heard the hype around this one, so I was expecting a great read and was not disappointed. This book was sitting on my shelf for about a year before I finally sat down and read it. It’s just that the cover of my edition (not the one shown) was off-putting, and the text was small. For some reason I’d managed to convince myself the book was longer than it is. Something also told me to wait for summer before starting any more relatively long books. In the end this was probably a good idea.

Once I started this book I found it difficult to put down. Anyone and anything interrupting my reading did not find me in a pleasant mood, but those who saw me between sittings constantly noted that I seemed unusually happy. They were right, this book made me extremely happy. I know that is an odd thing to say about a book following a rebellion, but it’s true. My emotions had nothing to do with the content of this novel, but everything to do with the fact that it was extremely well executed.

While I was instantly captivated from the prologue onward I began the story thinking that the plot was somewhat predictable, and somewhat disappointed in this regard because so many people rave about the plot. It was not until the second half of the novel that I began to see what these people were talking about. Brandon Sanderson managed to make a plot that could have seemed cliche feel fresh.

There is not much I can say without spoilers, but I have read so many books where the characters have a plan and everything works out as they thought. Even from my own experience I can tell you there are far too many variables in life for everything to go as expected, and Sanderson understands this.

Rather than the fact that some plans don’t work making the characters seem unprepared or incompetent it brought out their strengths and flaws which in turn made them seem much more human. This is because when plans failed the characters had to find a way to work around the setback or even use it to their advantage.

Sanderson did a great job slowly integrating his amazing world building and magic system in the plot. Even though we spend quite a bit of time with Vin as she has lessons in Allomancy I very rarely felt like there was the slightest bit of info-dumping. Even when I was starting to worry a section was heading in the direction of info-dumping Allomancy is so interesting that I probably wouldn’t have cared all that much if parts of the narrative had gone in that direction.

So much of fantasy relies on the same sets of magic systems often heavily influenced by Tolkien or some form of mythology (often certain mythologies in particular). While Allomancy still feels similar to other fantasy magic systems in some ways, it is different enough to be refreshing and interesting.

The writing in this book is very straightforward and easy to read. There are no flowery prose here. While I’m not the biggest fan of flowery writing, some readers might find this novel’s writing to be clunky at times. This wasn’t really a problem for me, but as I was reading it was something I thought others might have a problem with.

While I read this roughly 600 page book in two days I acknowledge that it is relatively long. While I read this book in two days others might find it to be somewhat of a time commitment. However, once I got into the book I was not bothered by the length at all. In fact I almost wish the last few chapters had gone into greater detail, but I suppose if they had there would be no need for a sequel.

The ending feels complete, but there are still some plot threads left for the sequel which I can’t wait to start. In fact, by the time this review is posted I may well have started The Well of Ascension.

What readers should know: While this is an adult fantasy novel it has a relatively low level of content that could be deemed “inappropriate.” The language is cleaner than most young adult novels I’ve read with very little cursing.

As this is a fantasy novel some amount of violence is expected. While there are fight scenes and characters who die blood filled deaths none of this is described in detail.

Rape is mentioned and alluded to on several occasions, particularly in the prologue during which a young slave girl is taken to be raped and then killed by her master narrowly avoiding this fate. Nothing is described in detail as the prologue is from the point of view of a character not even present at this encounter.

Rating: This is a great read, and one that I highly recommend. The Final Empire is perfect for someone trying to get introduced to high fantasy as a genre as it is fast paced and captivating from the beginning. People who want to get into Brandon Sanderson should consider either starting with this novel if they’re into high fantasy or Steelheart if they’re looking for a shorter read. Steelheart is a young adult novel involving superheros.

3 thoughts on “Mistborn: The Final Empire by Brandon Sanderson 5 stars”