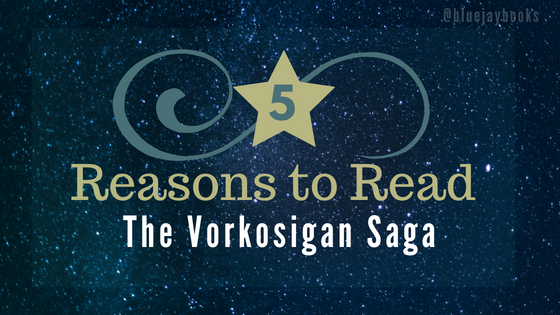 My break from blogging is because of something I’m sure many book bloggers will relate to none the less: spending all my free time binge reading a series of books.

Before we begin, I’d like to disclaim that my reviews typically point out my criticisms of books even when I love them, but this time I’ve decided to write a post that’s almost 100 percent positive for once. While I do see some criticisms I’ve seen for this series as valid, and haven’t even given all of the books five stars myself, this post is positive due to my enjoyment of the series.

What is the Vorkosigan Saga?

The Vorkosigan Saga is a series of science fiction novels that follows members of the Vorkosigan family, primarily Miles Vorkosigan, but also sometimes Miles’ parents, his cousin, his love interest, and his sibling. It also takes occasional forays into stories of characters who exist in the same universe as the Vorkosigans but otherwise have nothing to do with them at all. The first few books in the series were released in the 1980s, and the series has continued into recent years.

Due to Miles’ nature as the primary main character, the series is sometimes called the Miles Vorkosigan Adventures while others call it the Barrayar Saga on account of it being the planet most of the characters call home and the title of one of the books.

There are 16 books, several novellas, and content is still being written.

I love finding series with a lot of existing content. And, not only is the content of this series still being written but each book, at least that I’ve read so far, concludes in a satisfying enough way that you could stop reading there if you can repress the urge to continue.

Miles is such an awesome character with a complex personality.

Miles has flaws like his controlling nature, but that’s part of what makes his personality jump off the page. I love reading about Miles, his adventures, and the messes he gets into. He’s also happens to be one of the only disabled protagonists I’ve read about in all of science fiction, especially in series that began in the 1980s.

3) So Many Different Subgenres

These books are all science fiction, but their plots can focus around everything from mystery to romance.

With all the different plots, there’s practically a novel for everyone. No matter if you love military science fiction, space opera, or even genres like romance that aren’t typically part of science fiction, you’ll find a book with a plot focused on those elements here.

The series has won and been nominated for several Hugo awards.

I started this series skeptical of whether I would like it but ended up hardly able to put them down.

As stated at the beginning of this post, I was so caught up in this series that I didn’t have free time left to blog. That speaks for itself.

I started with the Warrior’s Apprentice and it worked well for me. Others start with the prequel novel, Shards of Honor, which follows Miles’s mother. Others still start from just about any book in the series; the books were all written with the intent that they could also be read as standalones.

It should be noted that the author writes out of chronologically, so there is an ongoing debate about how they should be read– often the debate comes down to whether chronological or publication order is best.

I’m afraid I don’t have a definitive answer to the ongoing debate about this series reading order, but this is the order I’ve read them in so far, and it’s worked for me: The Warrior’s Apprentice, The Vor Game, Cetaganda, Boarders of Infinity,  Brothers in Arms, Mirror Dance, Komarr, Memory, A Civil Campaign, and Winterfair Gifts.

I’ve currently gone back to the beginning to read the prequel novel Shards of Honor and plan to read its sequel Barrayar when I’ve finished.

And, there are still more I haven’t read yet!

Have you read the Vorkosigan Saga? Are you planning to? Should I turn infographics into a regular feature on this blog? Should I create an infographic for “Five Reasons to Read The Stormlight Archives” next?