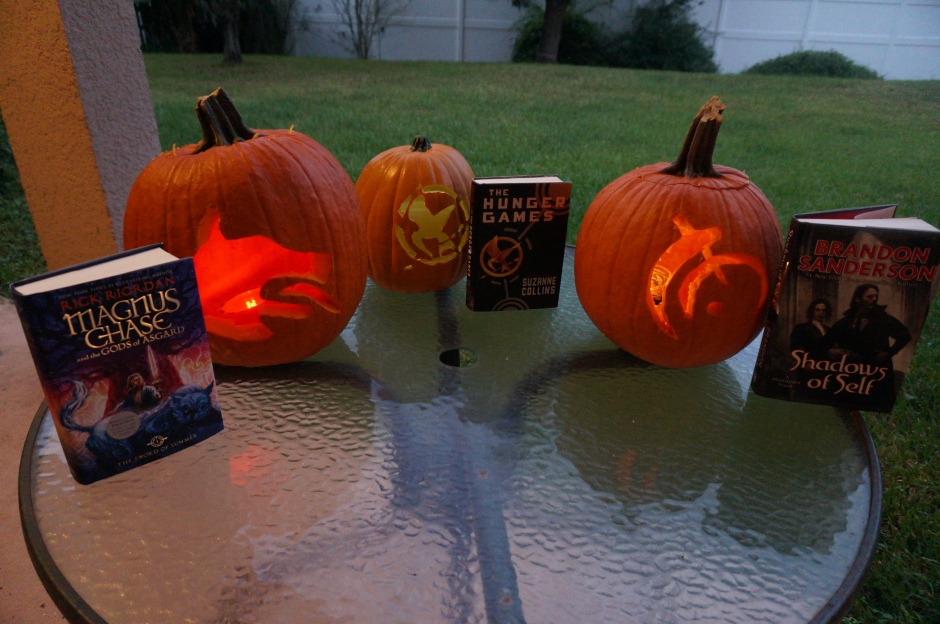 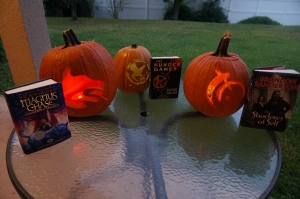 For Halloween I carved pumpkins based on the Mockingjay symbol from The Hunger Games by Suzane Collins, the wolf from Magnus Chase and the Gods of Asgard by Rick Riordan, and the symbol for pewter from Brandon Sanderson’s Mistborn series.

The instructions for the Magnus Chase pumpkin can be found here.

Title: Deep in the Meadow (The Hunger Games book 4)

*Note: This is a review of an advanced copy.

Synopsis: The Huger Games are over and the rebellion is won. Soon even this will be thrown into question.

Gianna Snow spent the first twelve years of her life like any other citizen of the capital: living like royalty. The rebellion changed that.

Now hated and shunned as the former President Snow’s granddaughter Gianna plans to lead a quiet life, but the new government has its own agenda– the 76 annual Hunger Games. Gianna is a prime candidate for the reaping.

Katniss Everdeen is the only person with any chance of stopping this new government regime, but with the girl on fire nowhere to be found Gianna’s life expectancy is bleak. If Gianna doesn’t find Katniss soon the rebellion will have been pointless.

Review: The first time I heard about the Hunger Games I have to admit I was hesitant. Kids killing kids? I thought. Who would enjoy such a thing?

I had expected for the story to be violent and amoral, but instead found myself pleasantly surprised. To put it simply: I LOVED it. Then there was the torturous six month wait for book two and the full year long wait for book three. I spent the next few years disappointed that there were no new books to look forwards to and thinking that the movies were the closest I could come to having new materials.

Being contacted as a beta reader for the secret fourth book was one of the best moments of my life. Naturally I replied with an enthusiastic YES!!!

This book did a great job introducing our new narrator, President’s Snow’s granddaughter. She starts out the book as the spoiled brat you expect from someone of her status but  from there her character development is some of the best I’ve ever seen. Katniss and Peeta might not be main characters in this novel but don’t worry Katniss fans: once the pair makes an appearance they’re on the page to stay.

I had a little problem shifting from Katniss’s to Gianna’s point of view but once I got over this shift the story was everything I could have hoped for. Deep in the Meadow is closed ended but has the potential for a series.

Disclaimers: If you thought books one through three were violent then you’re in for a shock. This book takes that violence to a whole new level. Ninety percent of the newly introduced characters sudden and tragic deaths.

Rating/Recommendations: This is one of the best books I’ve read all year. There is no set release date yet but Hunger Games fans will want to read this new volume the instant it’s released. Five/five for perfection!

Sorry, but unless Mrs. Collins decides to publish a fourth book the trilogy status still stands. The cover is a forgery made using paint and the silhouette is from the mocking jay on book one. I do not own any rights to the Hunger Games Trilogy nor am I associated with the author or publisher.

So it looks like I wasn’t entirely off about Suzanne Collins writing another book, but sufficient to say I was wrong about everything else. Read my review of The Ballad of Songbirds and Snakes to hear my thoughts on the actual “forth” Hunger Games book.